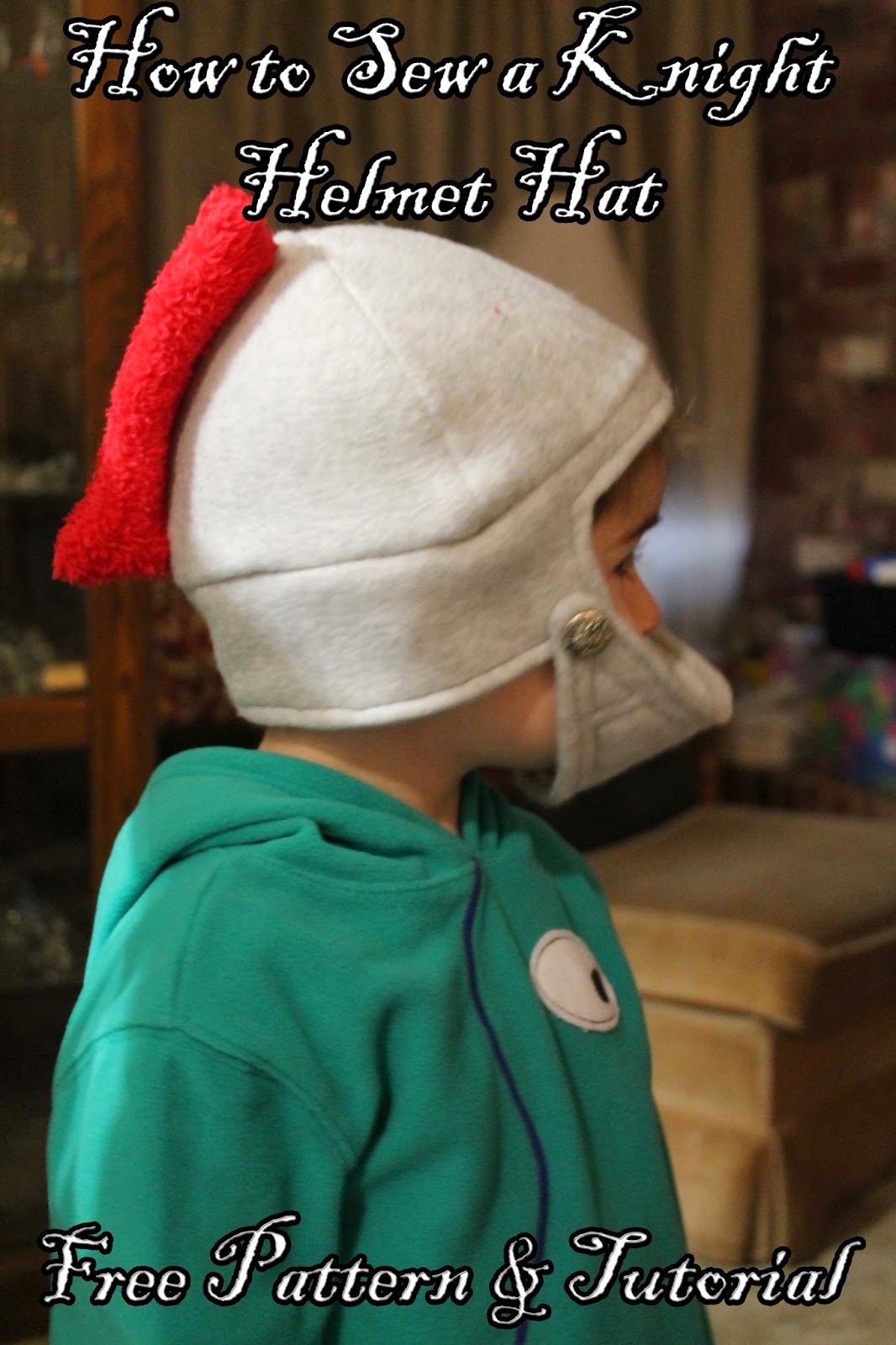 I've been looking for some scrap-busting projects lately, and there's been a freaky cold snap in Texas this month.  My son really had no good winter hats, so I decided to make one for him!  What better way to get him to wear his hat outside than let him play as a knight whenever he goes out? 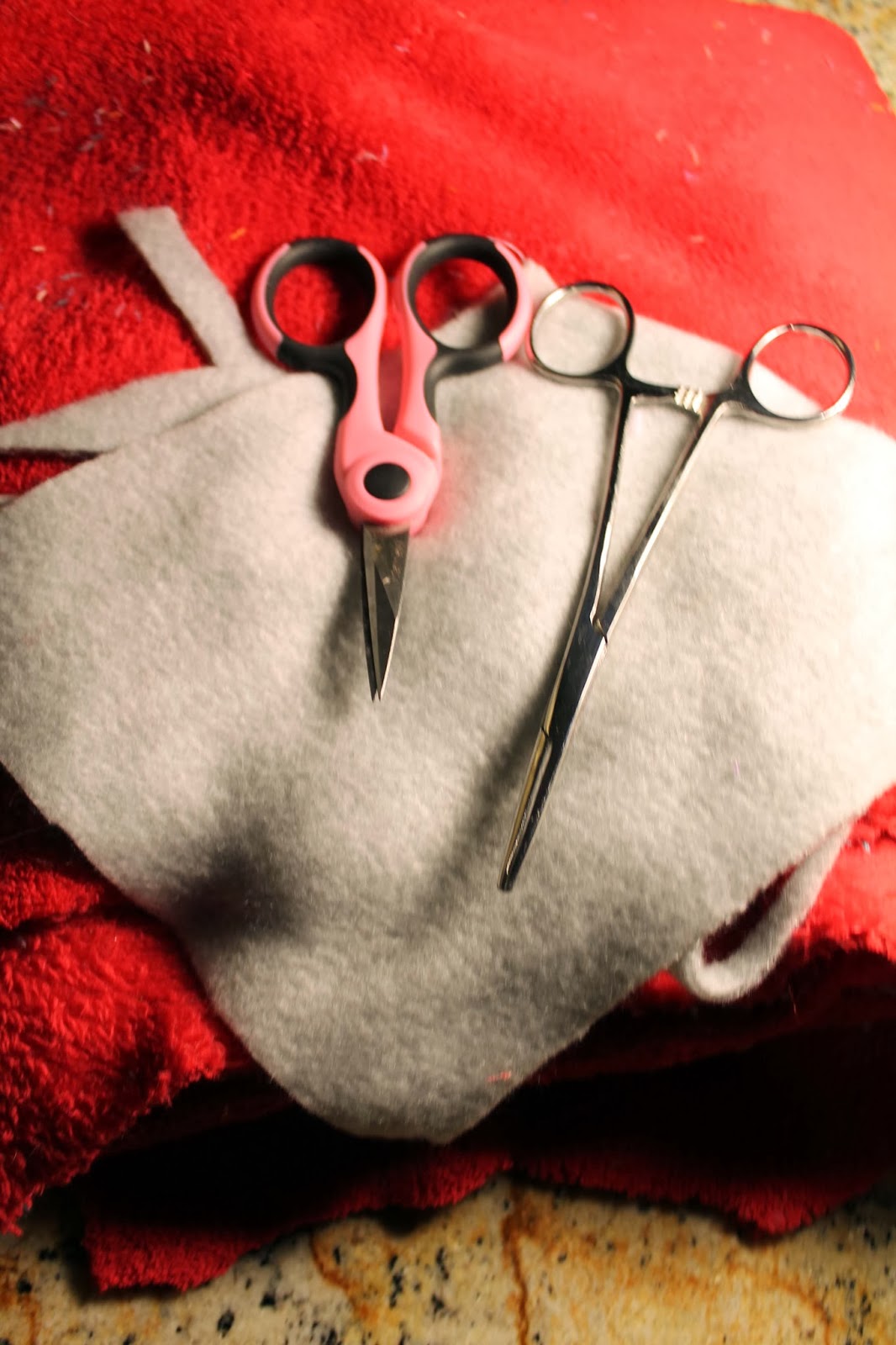 I'd have to call this at least an intermediate project.  You'll need to measure your child's (or whoever's) head, and adjust the pattern pieces some. My son's head is 20".

Now, this pattern is for a pre-schooler's 20" head.  You can tweak the pattern from there if you need it larger or smaller.  Measure, measure, measure! This will give you the general shapes you need to make the hat!

I began by cutting out all my gray fleece pieces.  You will notice on your pattern that there is a piece that states you should fold the fabric and cut two.  This is the top piece in this picture.  Fold your fleece where the dotted line is and cut from there so you will have pieces such as the ones pictured above! 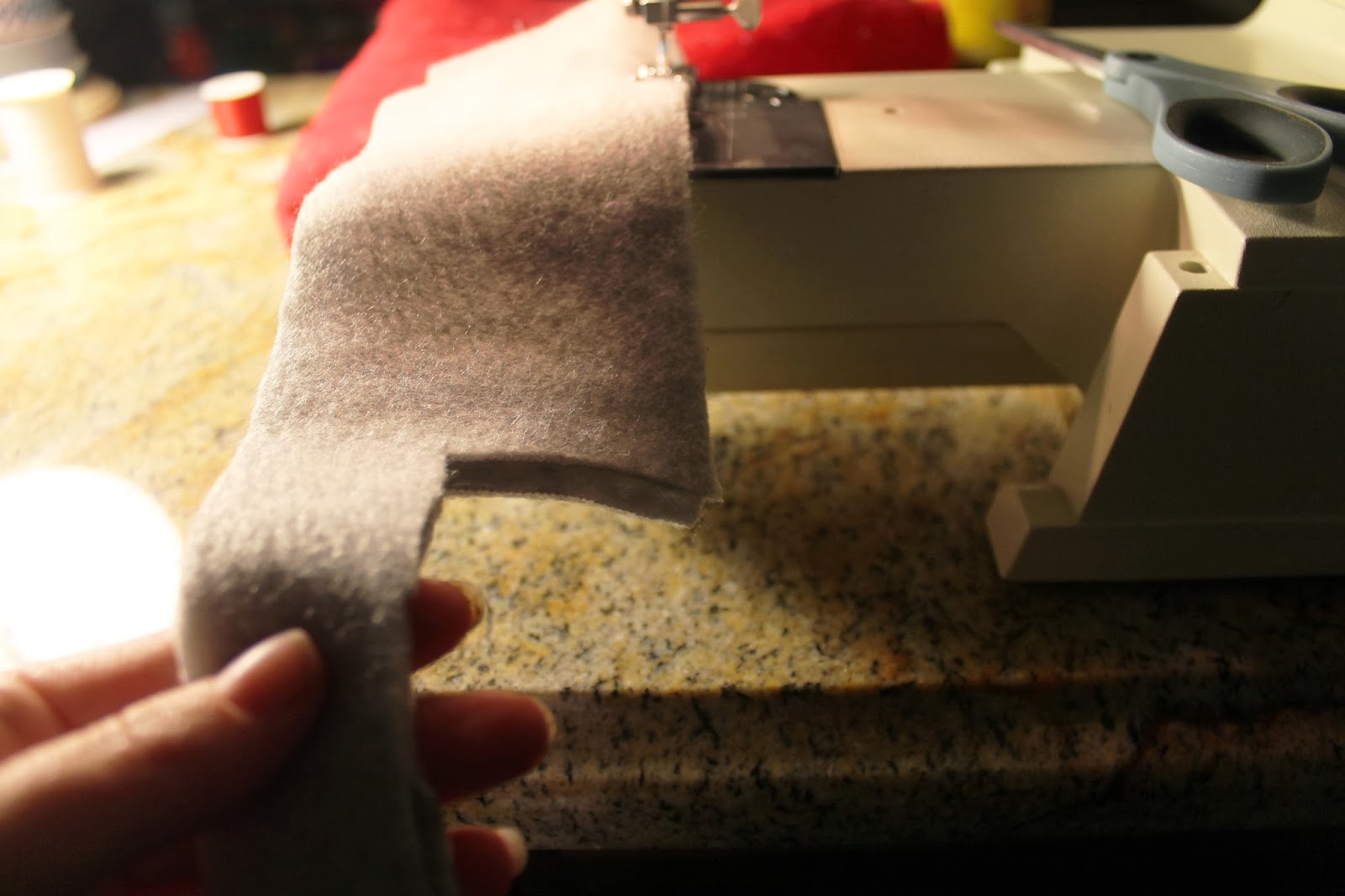 I sewed the brim of the hat first (the longest pieces).   You only want to sew the bottom edge with the cut out part in it!  Sew that seam, then flip it inside out.  You'll be sewing a second seam along your first on the OUTSIDE of the hat.  Like the photos below! 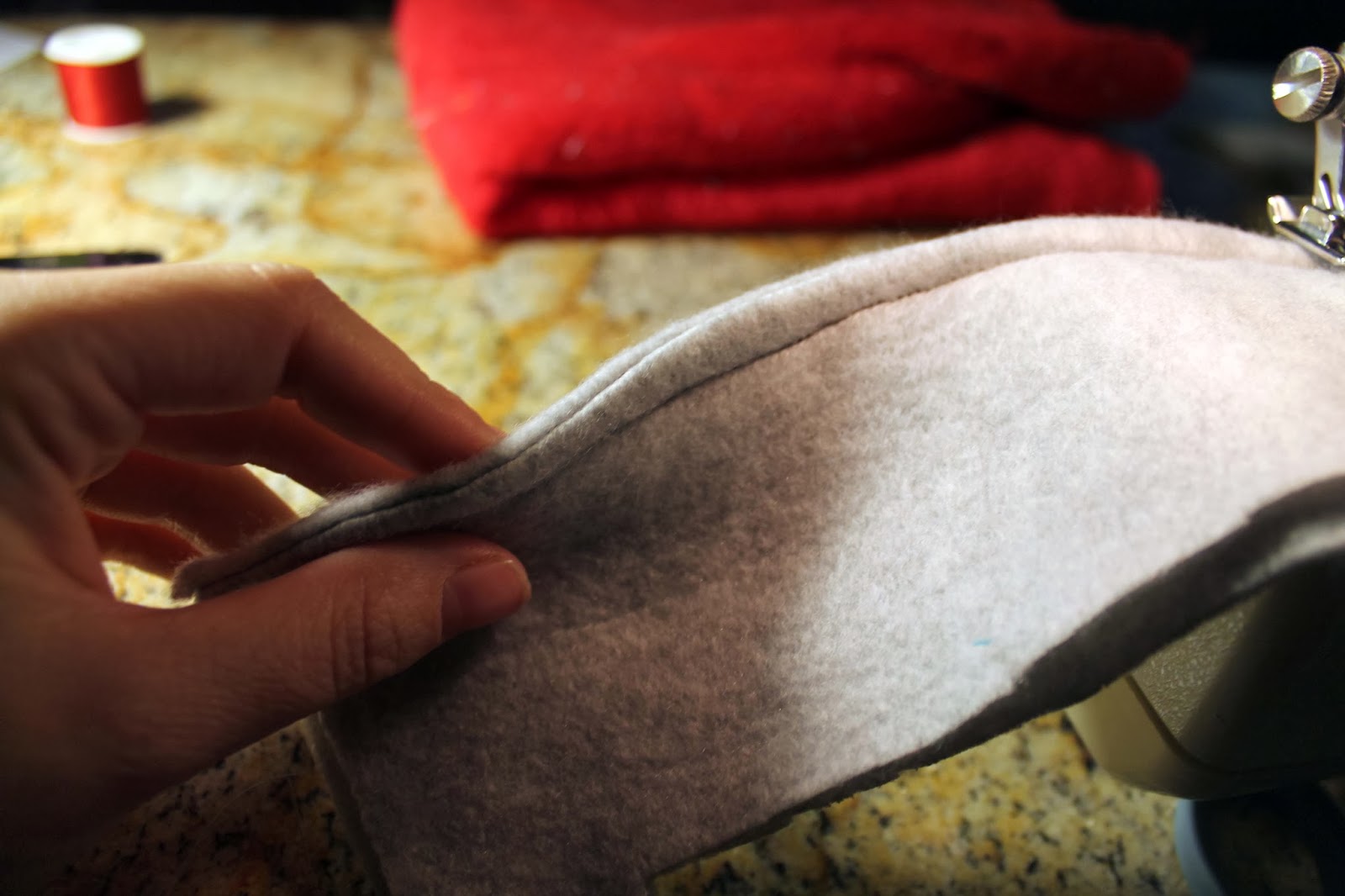 Notice your first seam (by my hand) and how you flipped it to the inside, then the second seam on the outside. 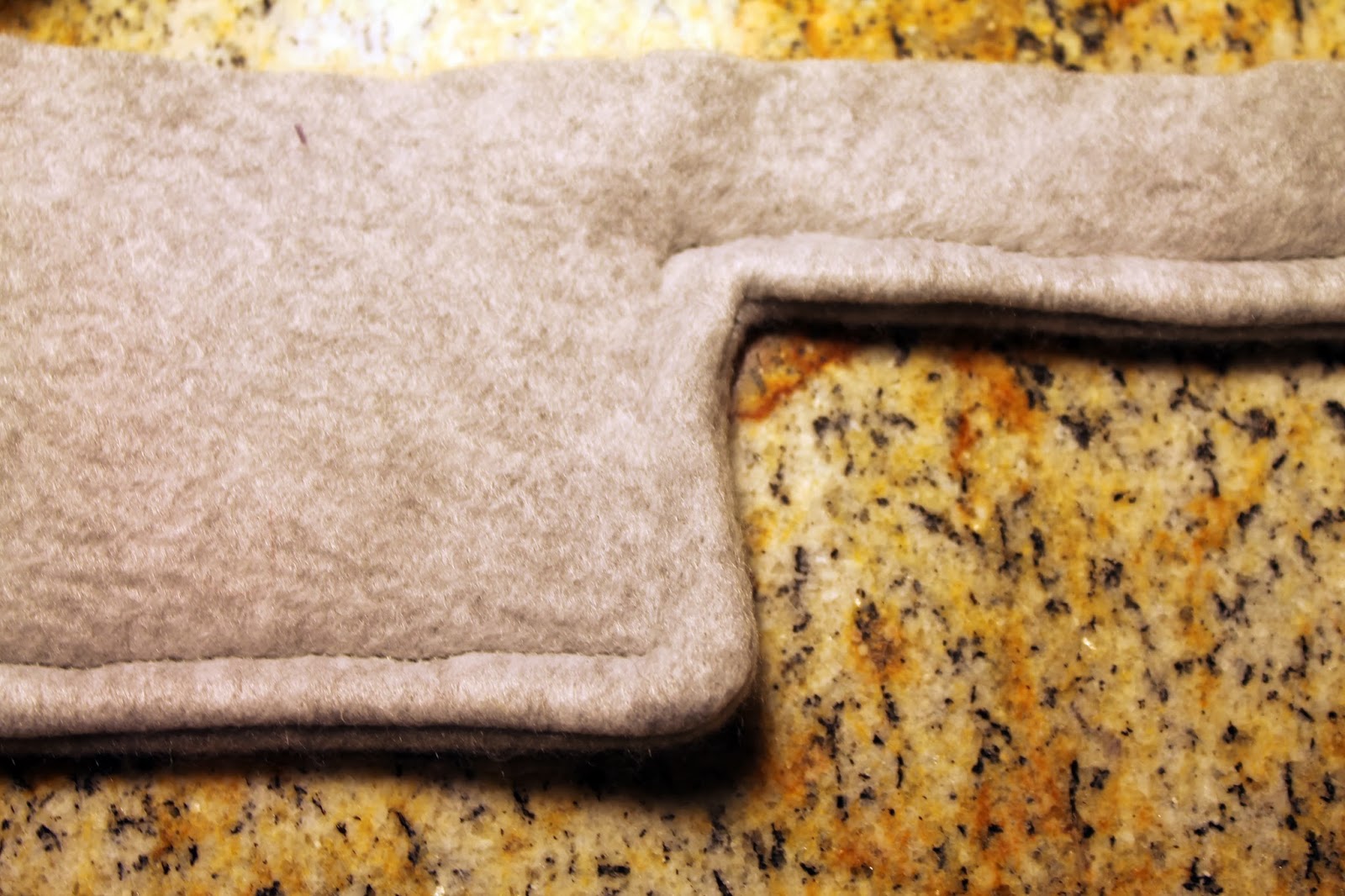 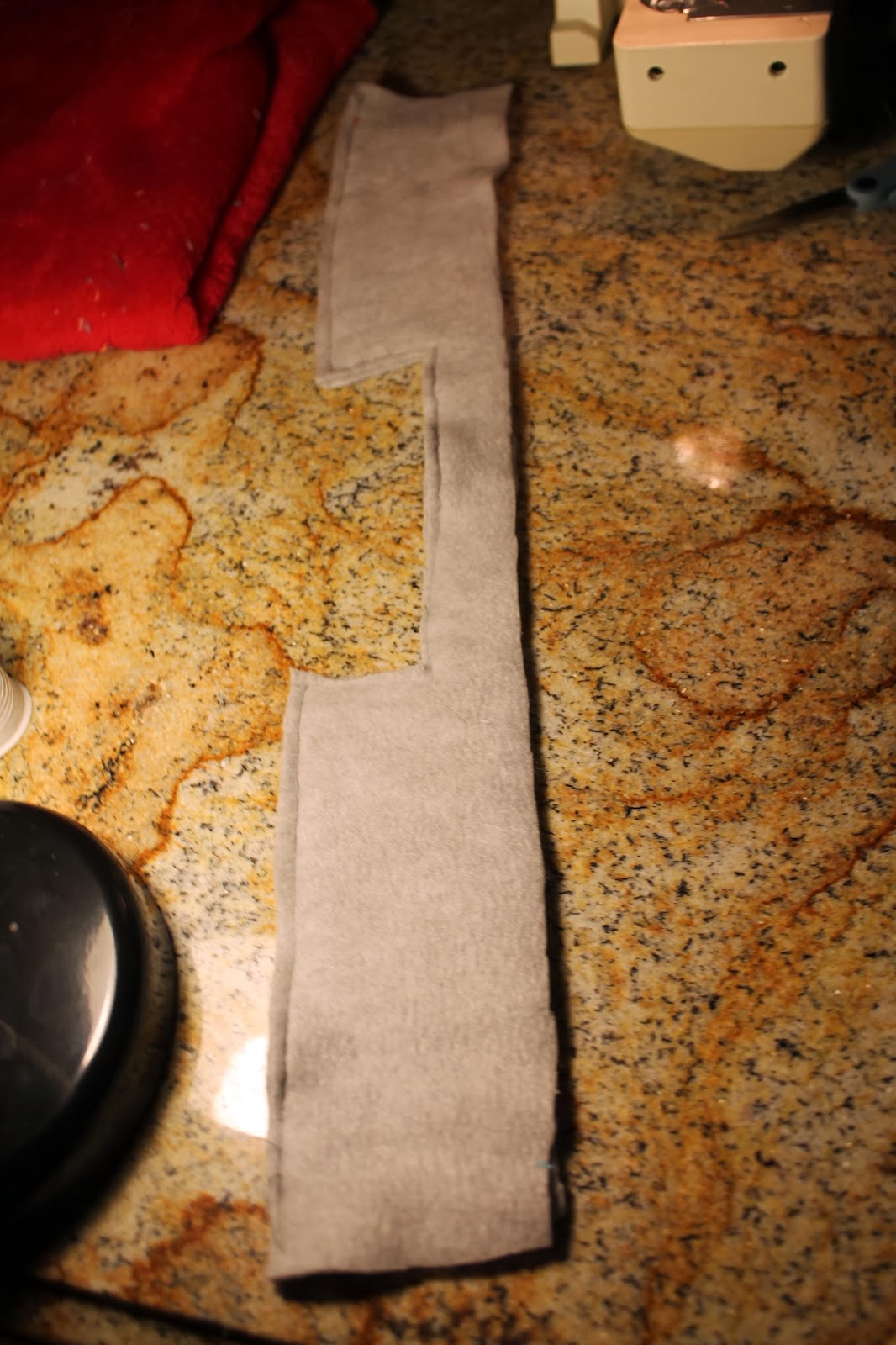 This is exactly what your brim should look like at this point.  Notice the three raw edges, then the double seamed bottom.  You can put the brim aside at this point, and grab your four triangle gray pieces.  These need sewn together like the photo below, so you have a semi-circle when you are finished. 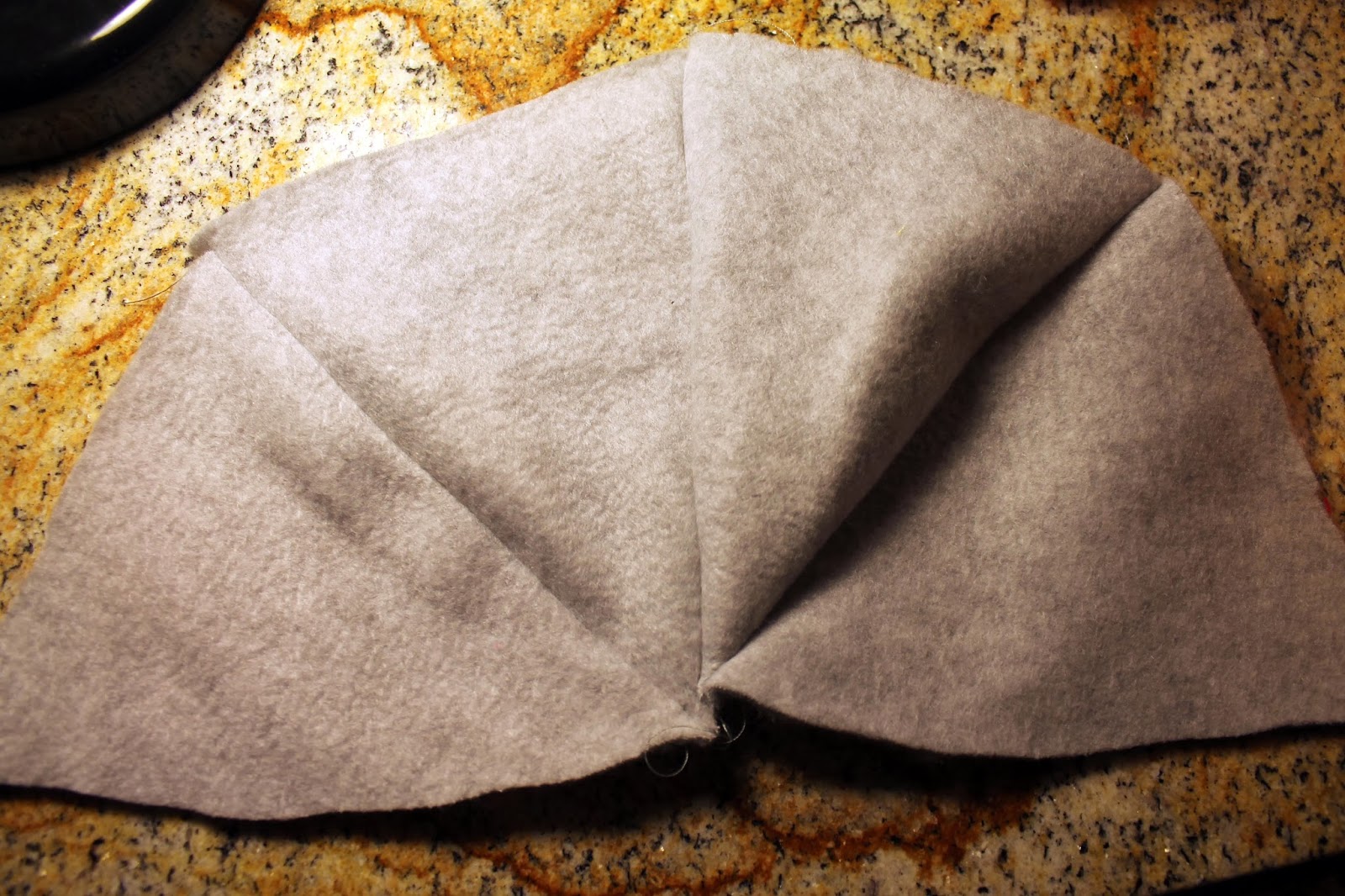 For the face visor, you are going to double seam again!  This time you will take your two pattern parts, and sew them completely together with a 1/4" seam except for about a 1 - 1 1/2" opening in which to flip your visor inside out.  I use hemostats to help me here, but really any tweezer or even a pencil (eraser side!) can help.  Once you have your seam on the inside of your visor, hand sew the opening shut.  Then on your sewing machine, sew a 1/4" seam around the edge of the visor (like below).  You'll notice how much more stable your fabric feels. 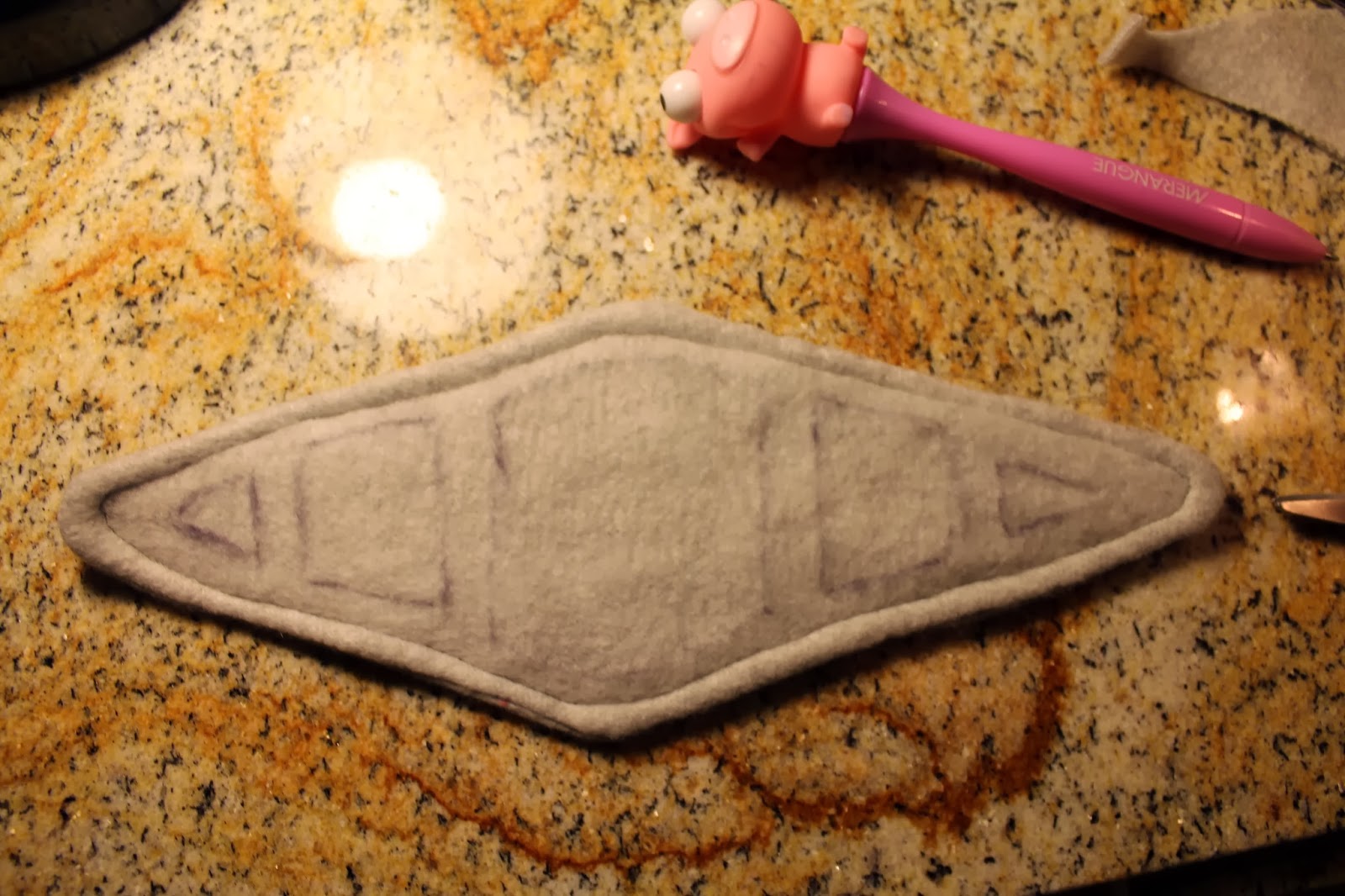 On the BACKSIDE of the visor (the side you know won't be showing) take a pen and lightly draw out the visor's lines.  Don't you love my piggy pen?

Sew over these lines.  When you're finished you should have the visor above!  (Not the neatest job, but he's three... he'll love it any way). 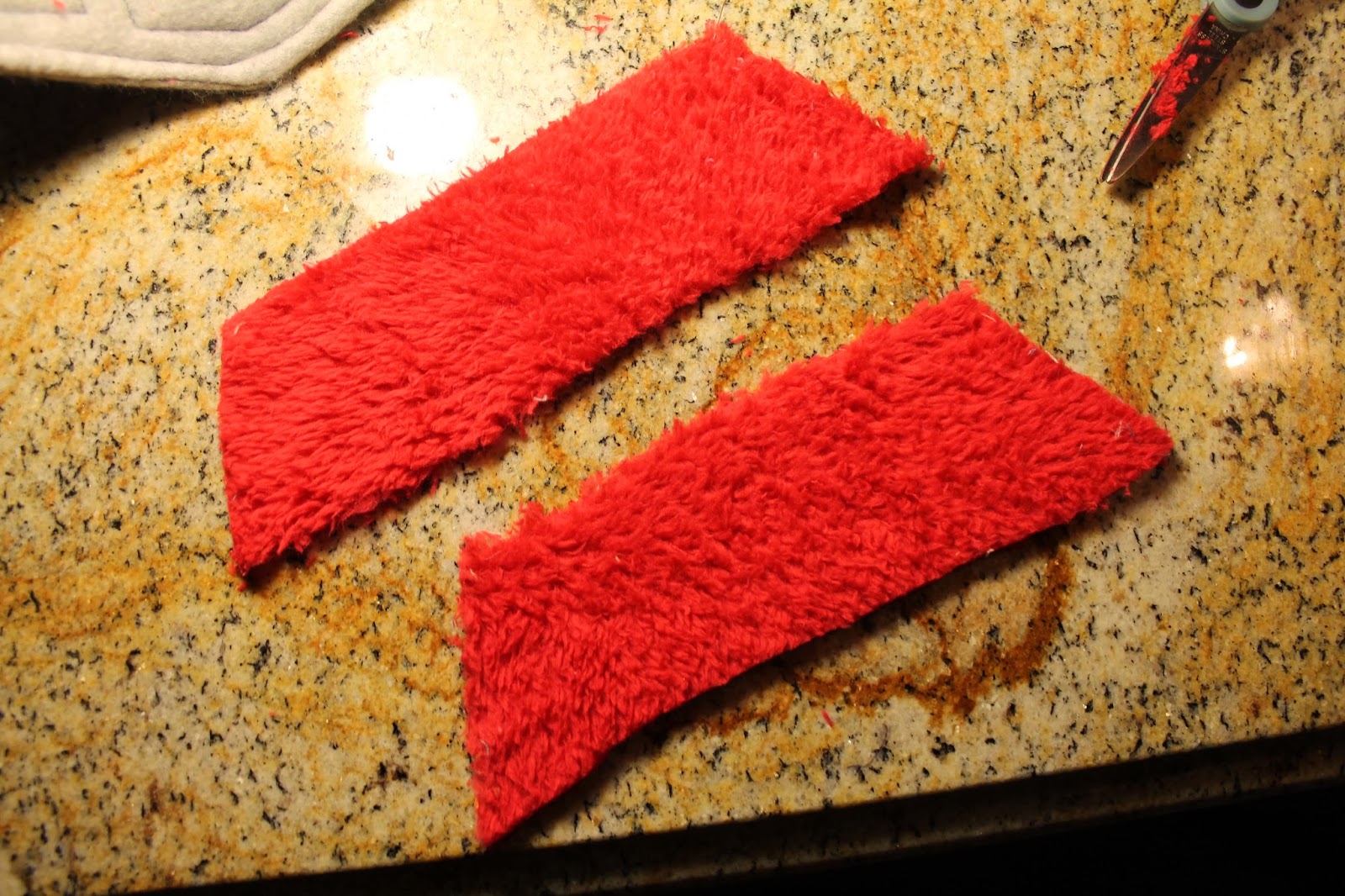 Moving on to the red!  Isn't this the best fleece you've ever seen for the poofy part of a knight's helmet!? Cut two from your pattern, sew together with a 1/4" seam, and flip inside out! 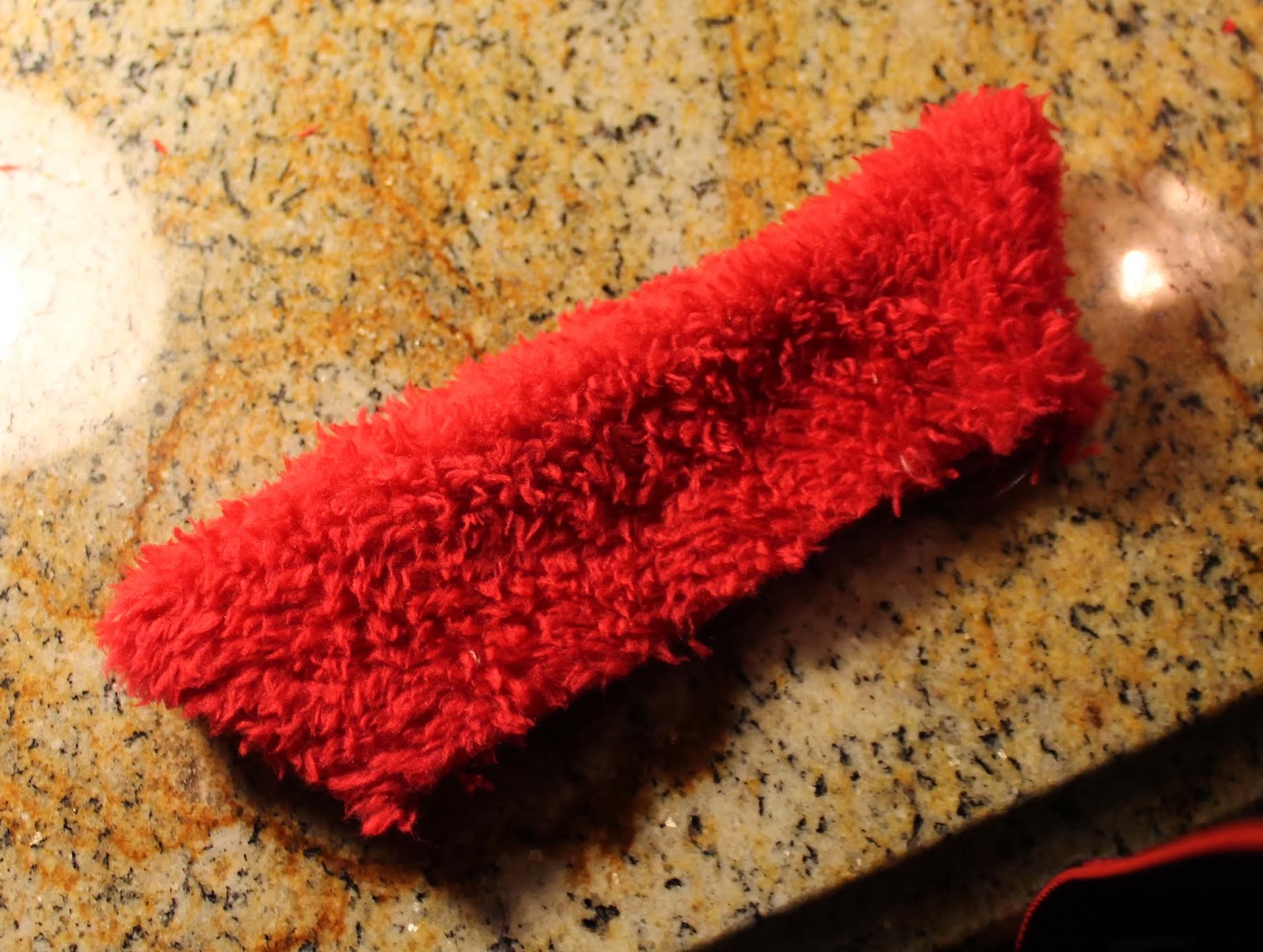 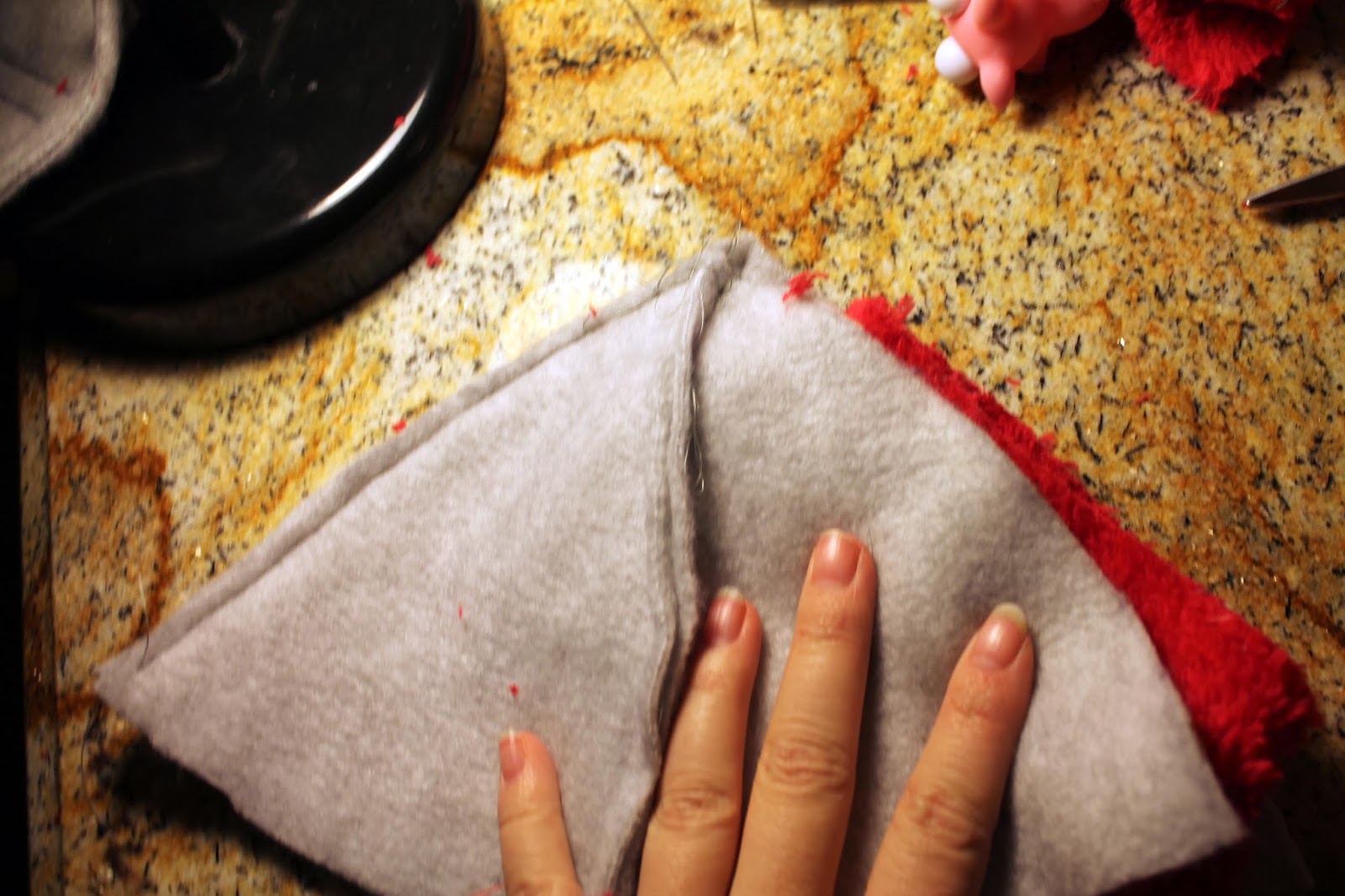 Now back to your semi-circle of gray!  Fold your "feather poof" (what is that called any way?) into the unsewn seam of the hat. The hat should be inside out, the poof should have it's unsewn seam facing out of the hat (see the pic above!)  Sew the seam, so the poof is now sewn securely into the hat. 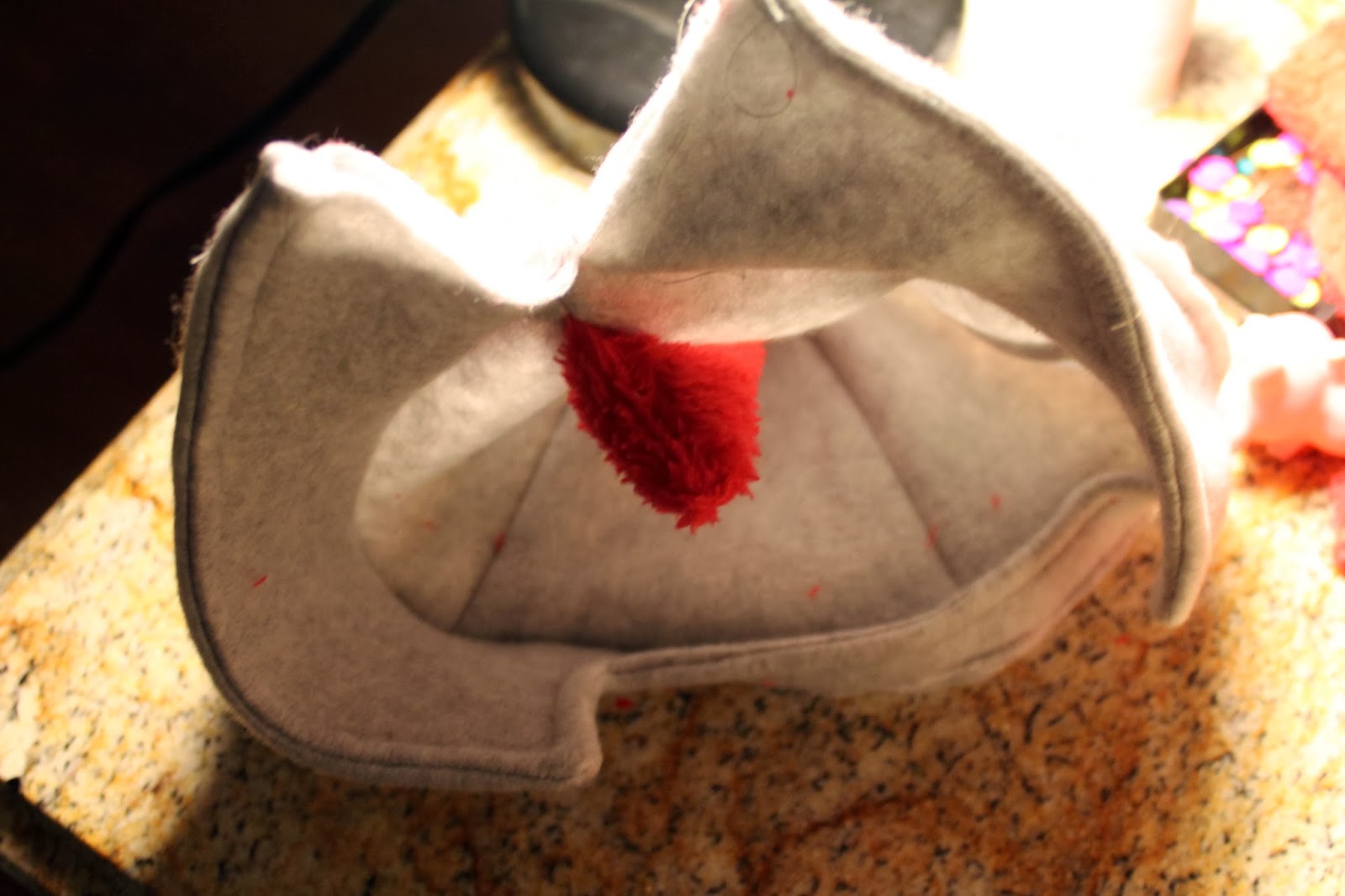 Now it's time to attach the brim.  You'll want the raw edges of the sides to meet the seam of the hat with the red poof sewn in.  This is the back of your hat!  Sew the brim to the hat. 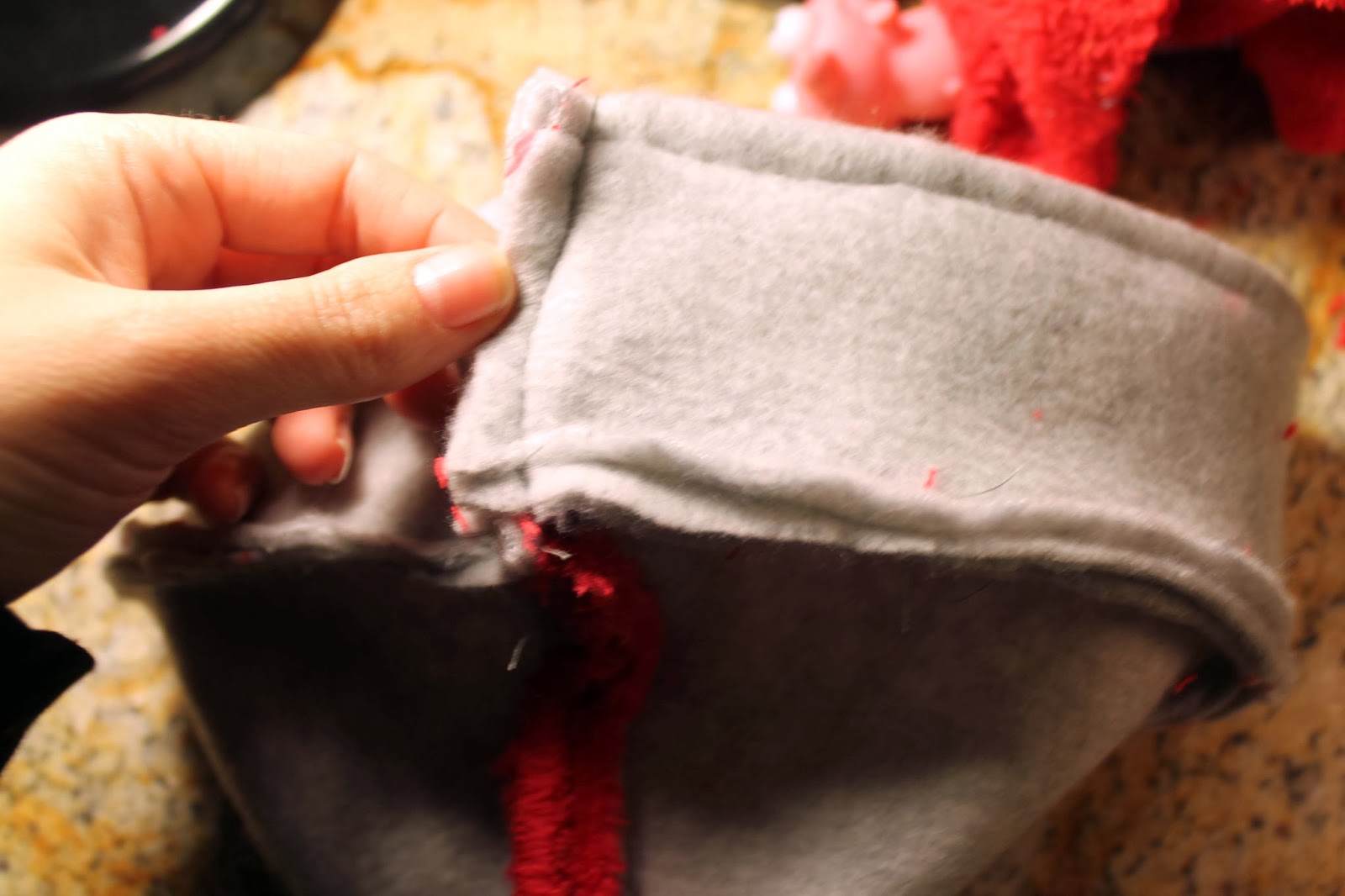 After the brim is on, take the two ends of the brim where they meet, and sew them together, like so. 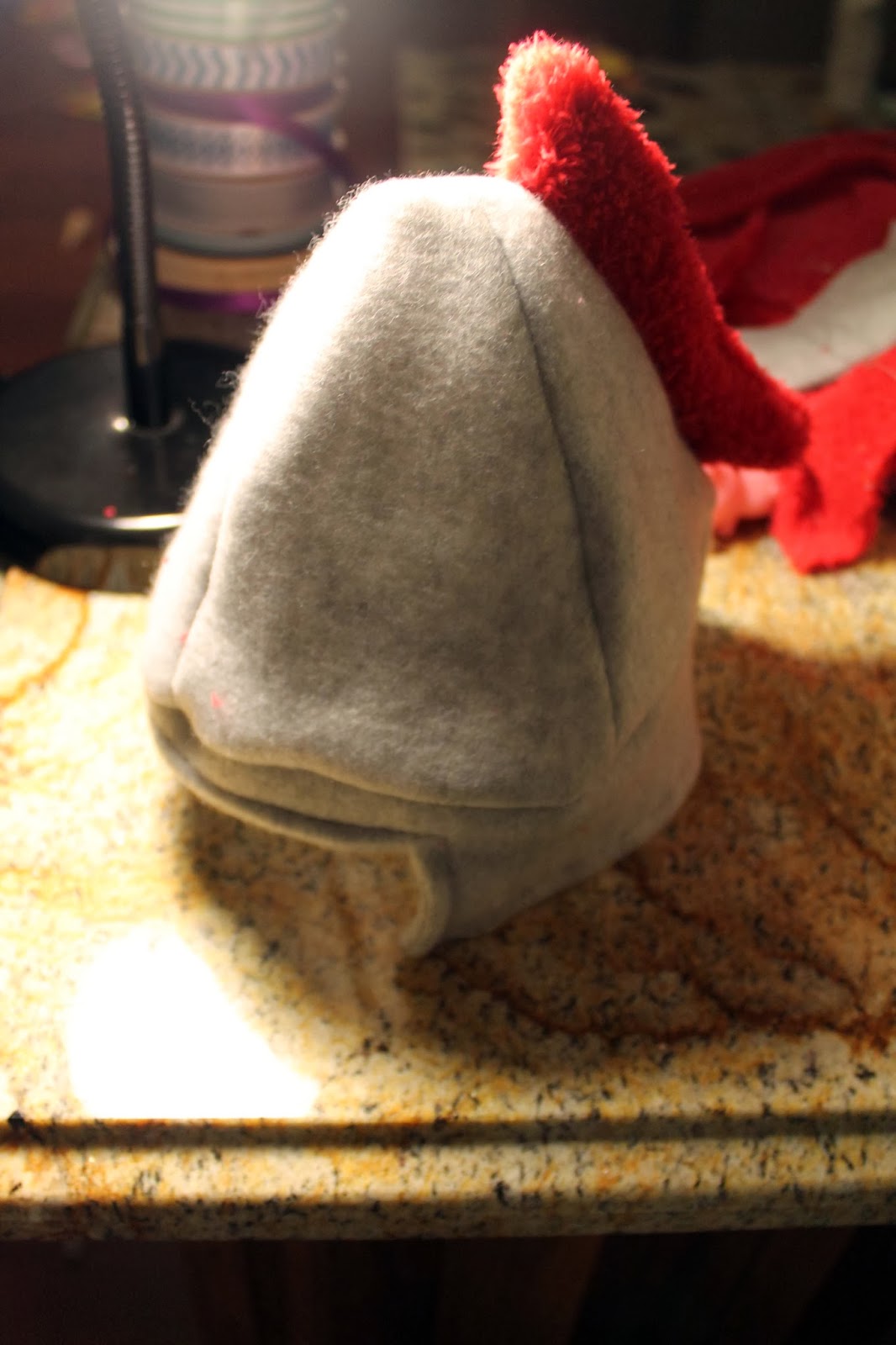 Flip that hat inside out and you'll be left with something similar to the above photo!  Almost there!! 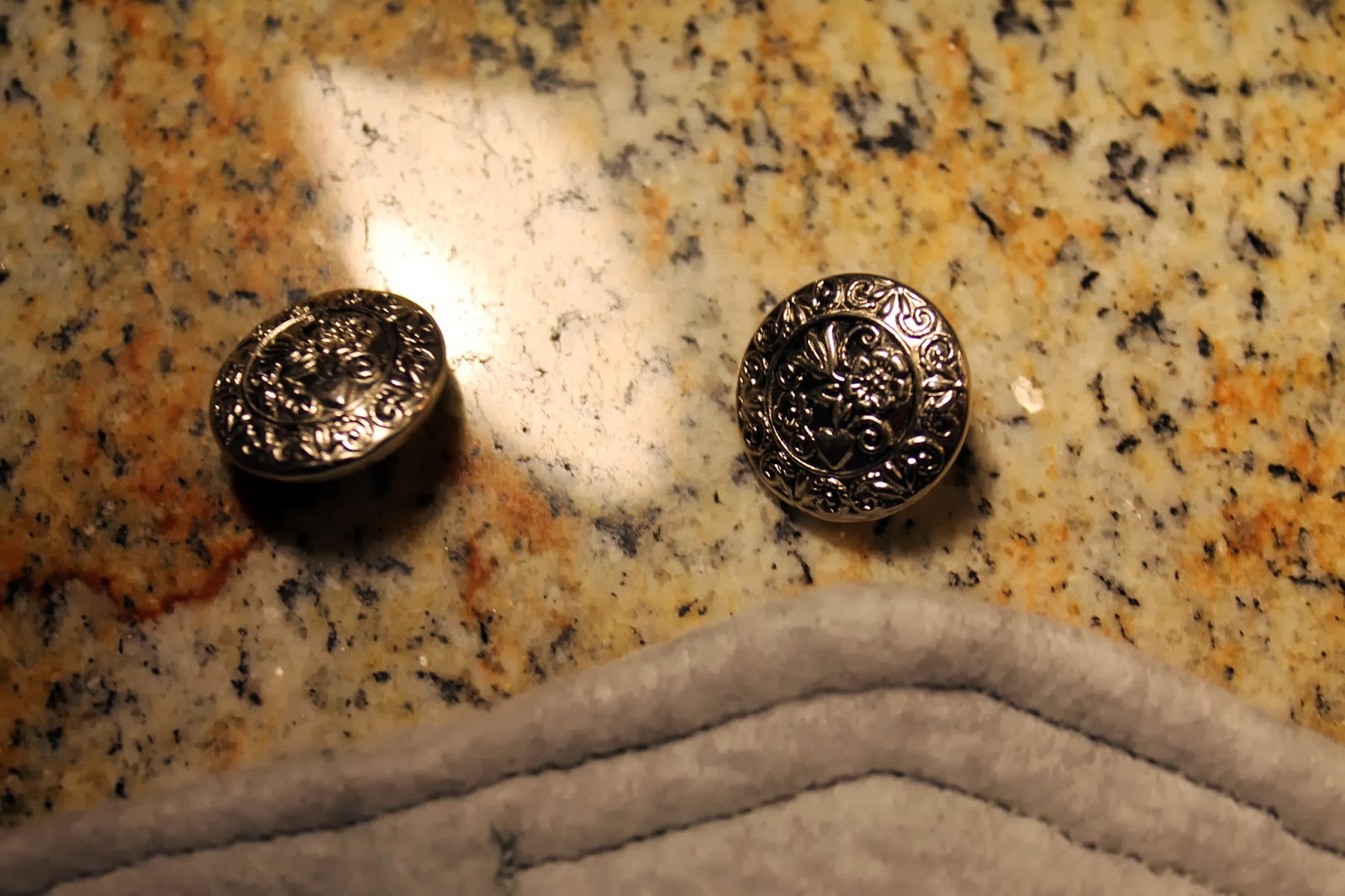 For my buttons I found some old silver vintage ones that I figured look very knightly and royal. 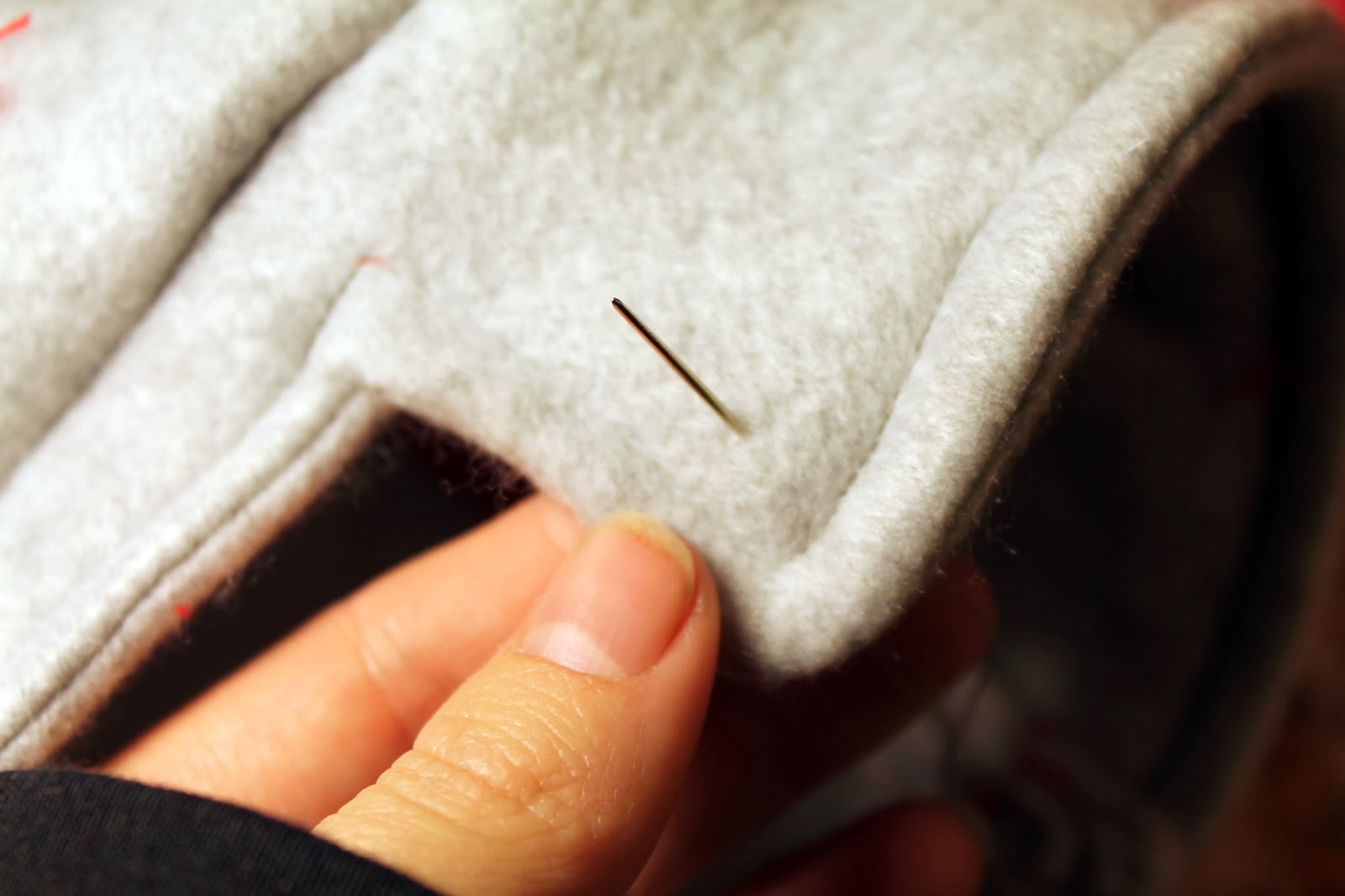 You'll take your needle and thread (I used gray) and simply go through the corner of the brim (where the cutout is)... 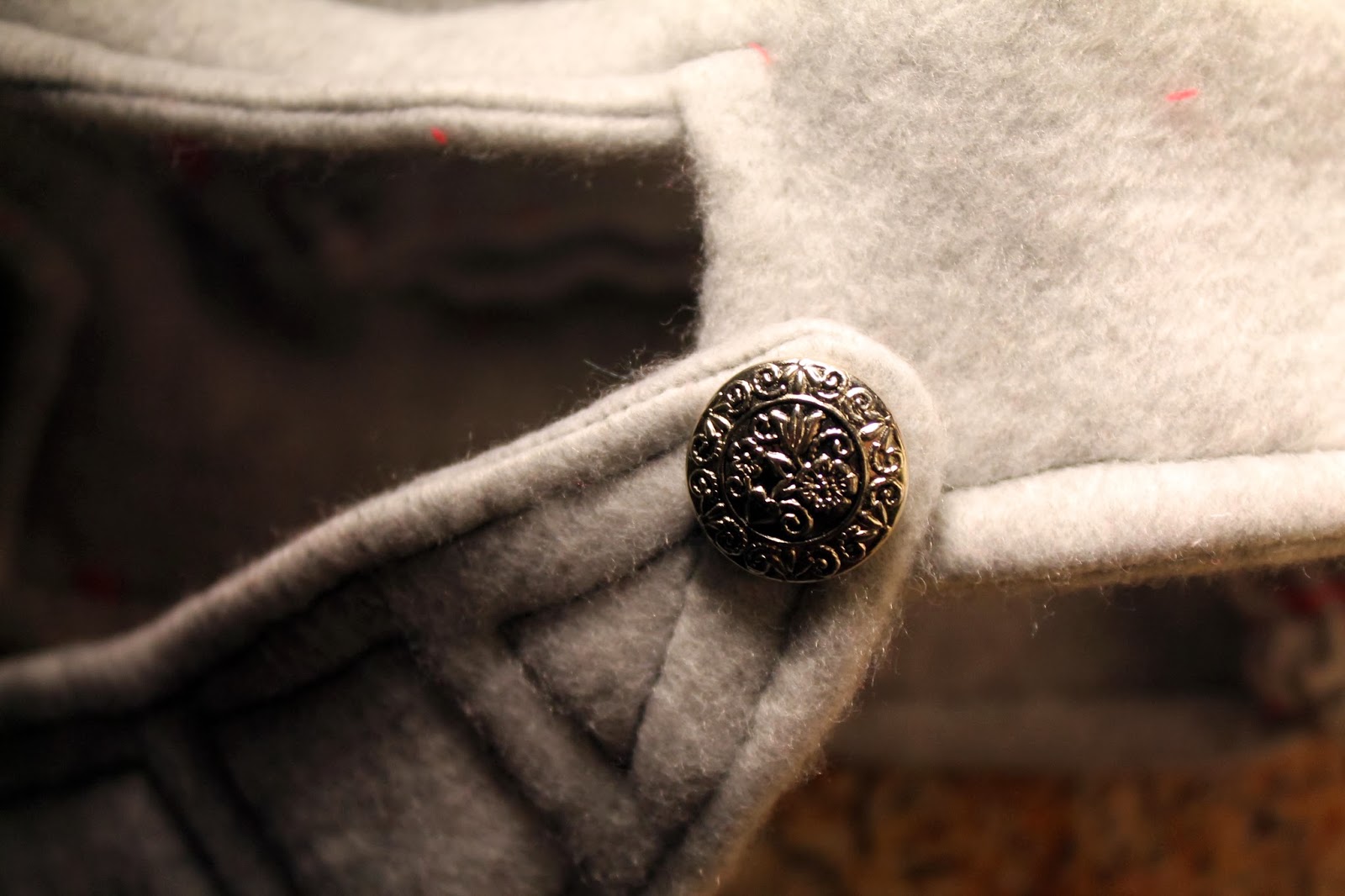 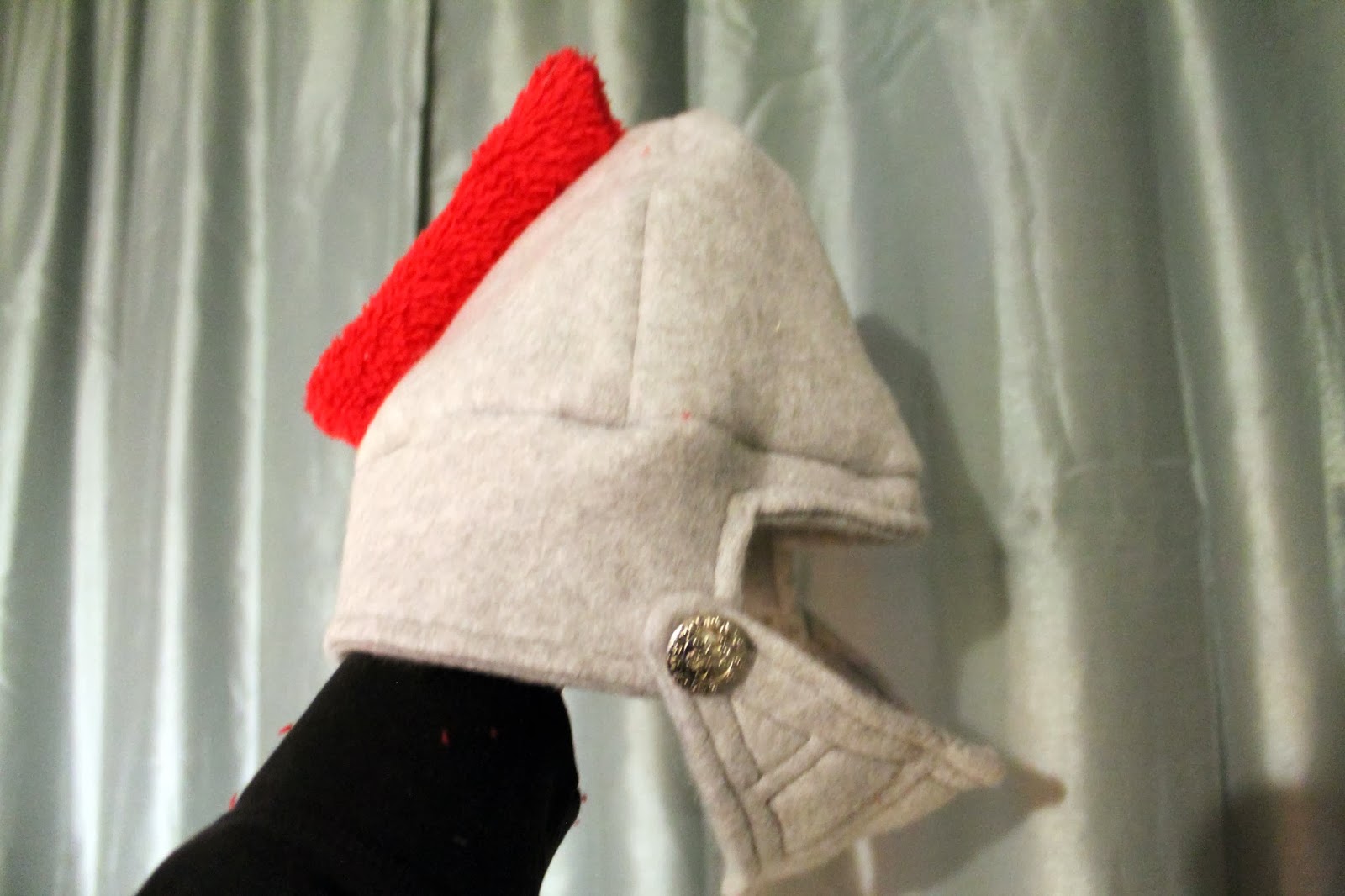 And voila!  A knight helmet that will keep little wee ears warm on cool days. 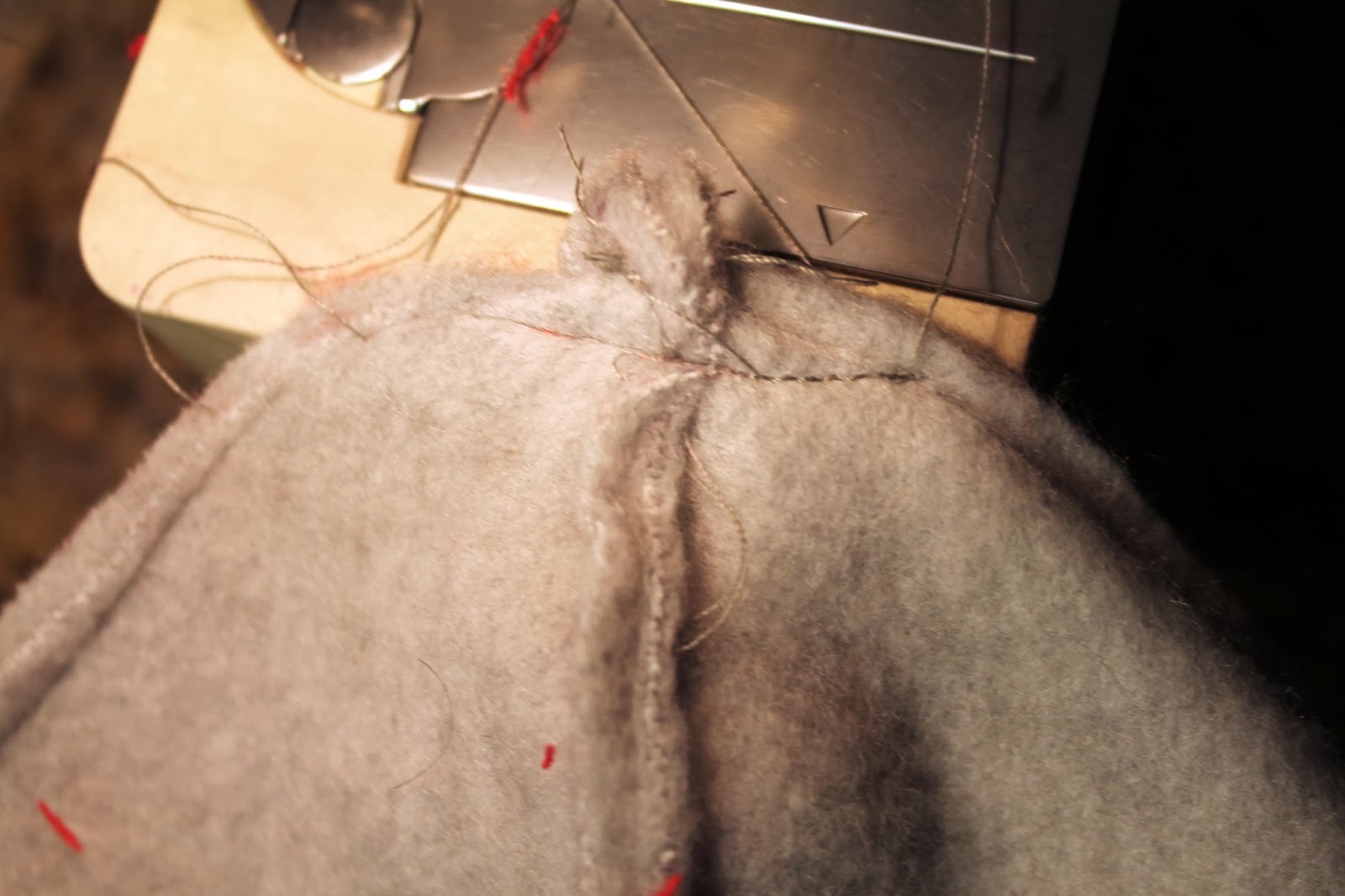 If you find yourself with too "pointy" a helmet, there is a simple, slightly cheating, fix.  Flip your hat inside out, and sew a straight line across the tip of the top of your hat (like the photo above).  You can't do much more than 1/2" or your hat will go wonky. 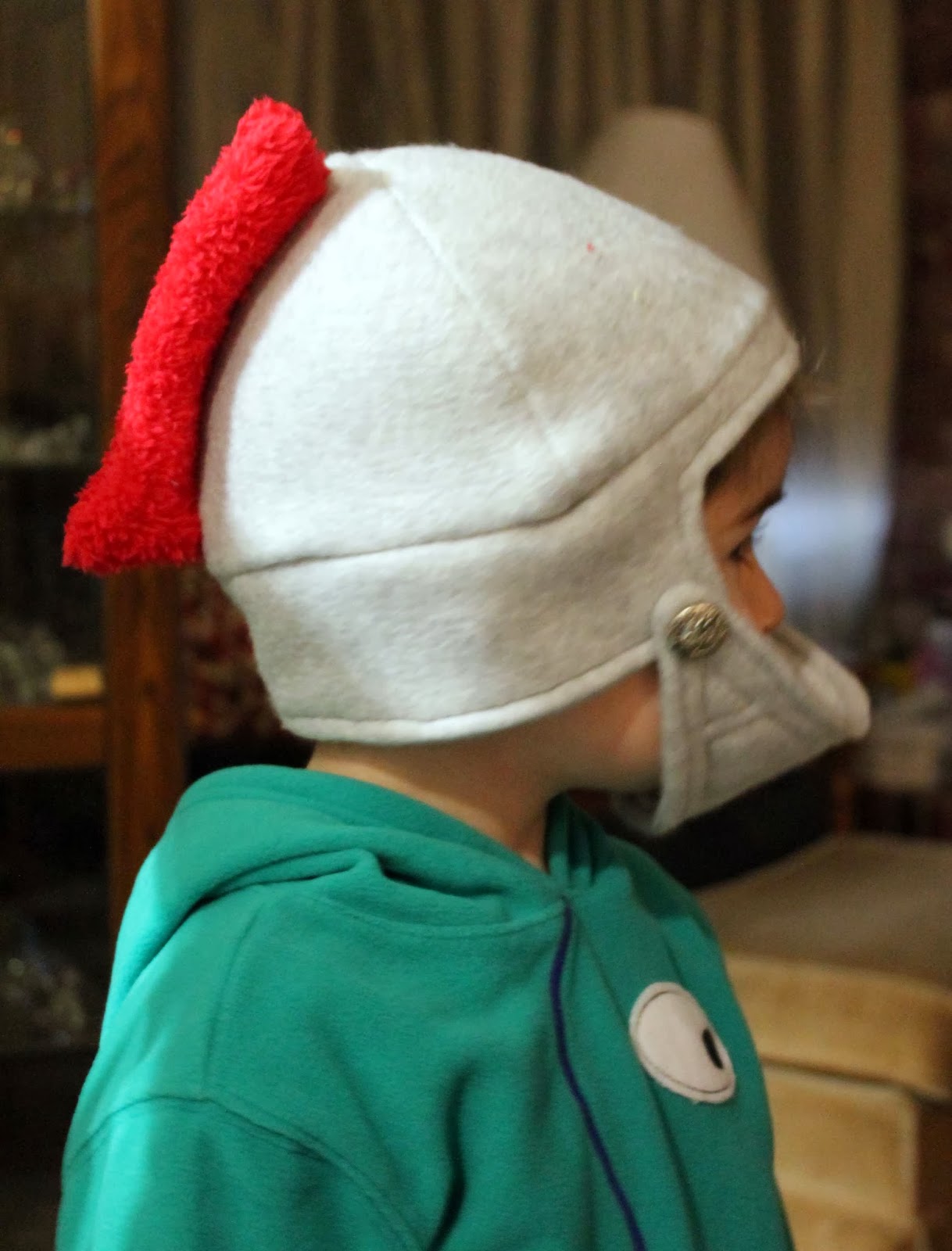 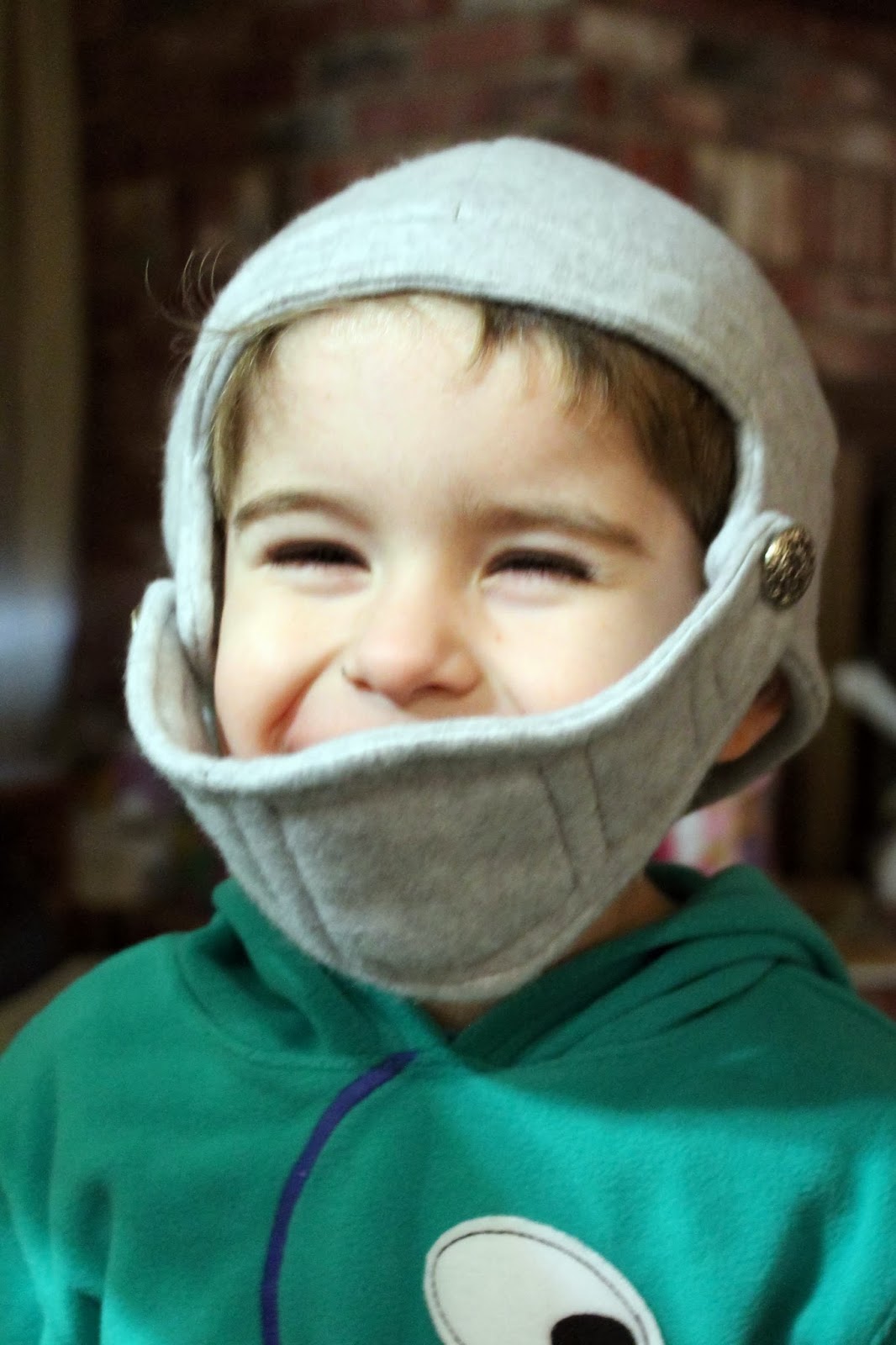 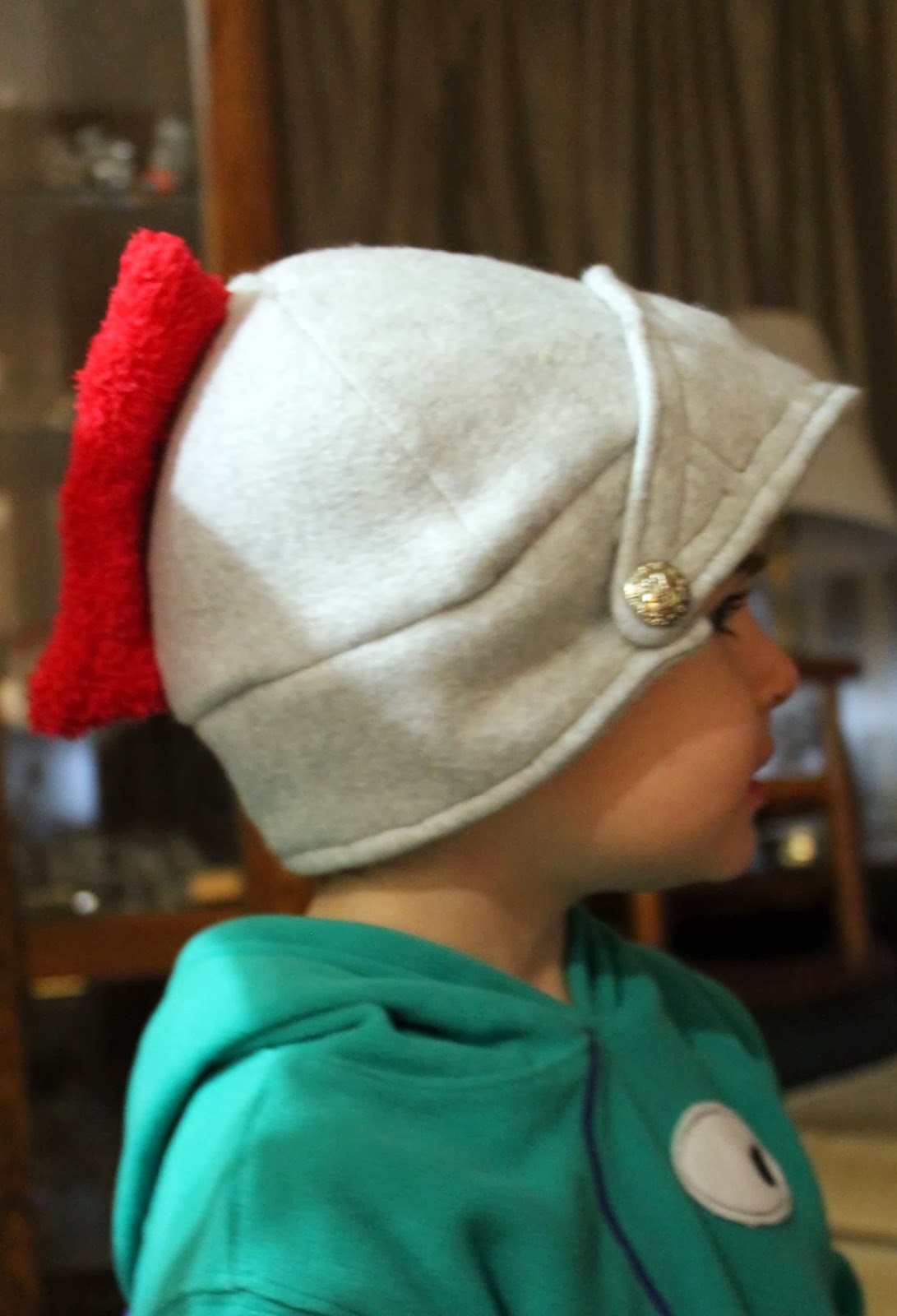 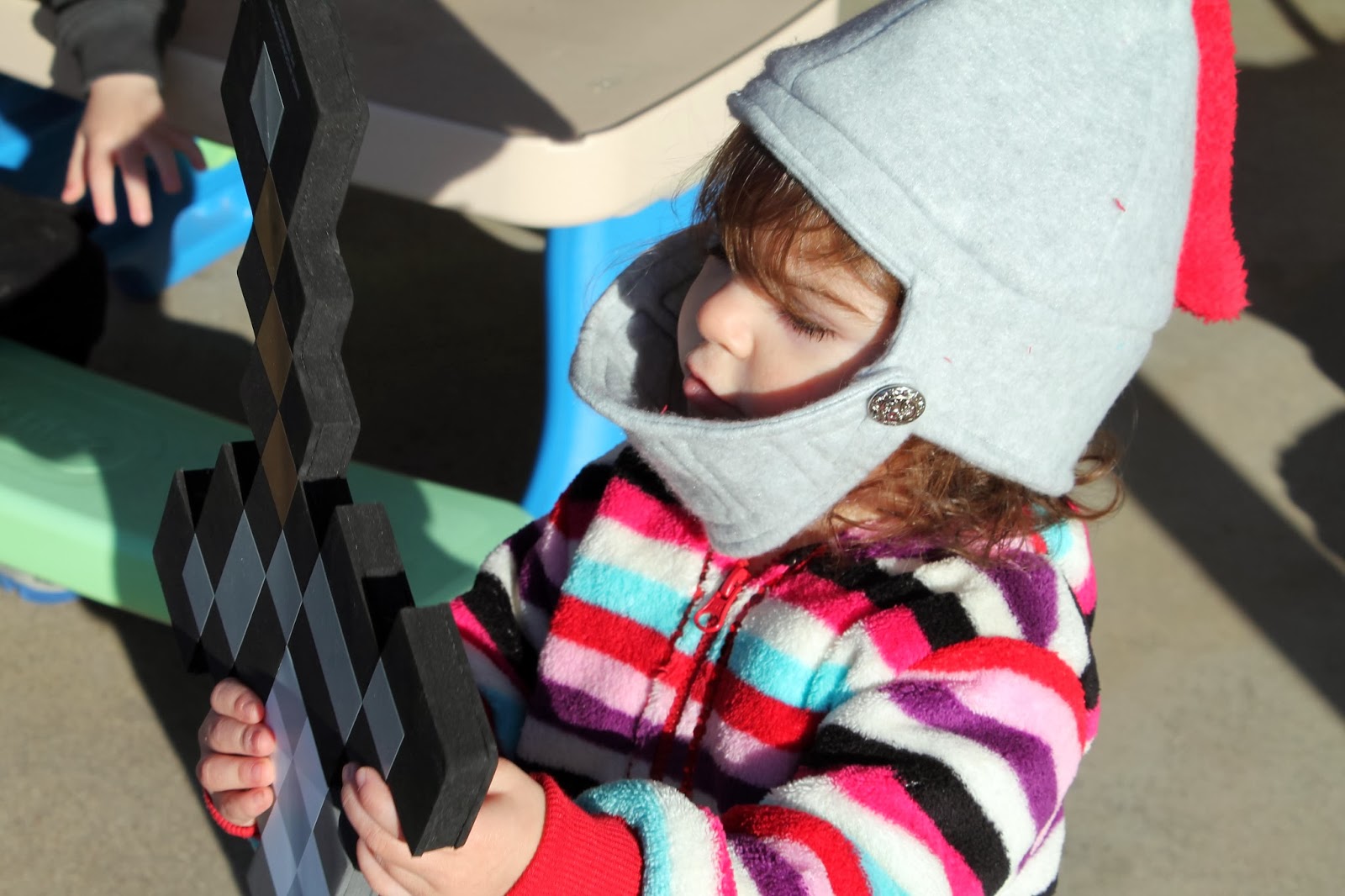 The hat was a hit with ALL my kids.  I even let them run around with their daddy's play sword (he was at work!)  You can see it's a bit big on the twins, but fits Noah perfectly!